Now that my daughter is old enough to not just enjoy picture books but understand the actual words as well, I’ve been looking for more Muslim-centered books for her… books that are not necessarily ‘Islamic’ (i.e. stories from Qur’an or hadith in ostensibly child-friendly language) but simply with Muslim characters and a background/ references to which young Muslim children can relate.
So when I received “My Dad’s Beard” by Zanib Mian, I was pretty excited – it seemed exactly the kind of book that I was looking for but hadn’t seemed to exist in the (Muslim) market yet. 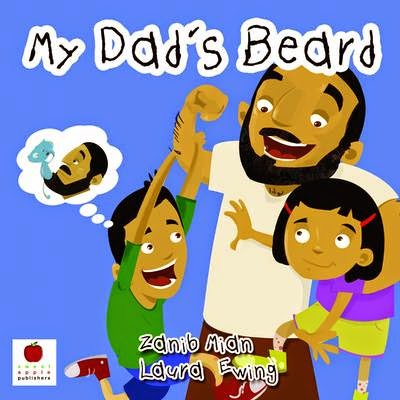 Big, soft cover, and glossy, “My Dad’s Beard” is the humorous and heart-warming story of a young boy listing all the reasons he loves his father’s beard. The illustrations are bright and colourful and the colour and font of the text changes with every page, which do a wonderful of job of keeping the attention span of an otherwise impatient four year old.

My daughter adores this book – perhaps mainly because all the male members of her family (father, grandfather, uncles, and great-grandfather) all have beards of varying lengths and bushiness – and got a kick out of the imaginary “teeny tiny cat” that lives in Dad’s beard.

I love this book for several other reasons. First of all, it is wonderfully refreshing to find a well-written, well-illustrated book for Muslim children below the age of 8. My experience with books targeted at the under-8 demographic has been that even if illustrations are vibrant, the language still tends to be too advanced for toddlers and involves subject matter that may go over such young children’s heads.

Secondly, as I noted previously, there’s a distinct dearth of books for young children that isn’t specifically “Islamic” or preachy, yet still Muslim-oriented and with subtle Islamic references – such as the line “My dad says he has a got a beard because he’s copying the greatest man who ever lived.” It’s a wonderful way for parents to link aspects of ‘Muslim culture’ which young readers will immediately recognize, to how it’s relevant to Islam itself.

Finally, what was quite possibly my favourite part was how the book presented the Muslim father as a loving, playful, comforting, supportive, funny, and imaginative parent – with both his son and his daughter. There are so few positive representations of Muslim men, and especially of involved Muslim fathers, that I think that “My Dad’s Beard” is practically revolutionary. I know that for my daughter, who is separated from her father but has no dearth of loving and involved father-figures, “My Dad’s Beard” was a fun and reassuring reminder about her father as well as the other men in her life, and how important they are to her.

In short, I heartily recommend “My Dad’s Beard” for all those with hirsute Muslim male relatives (although it may be slightly awkward for those who are biologically unable to grow much facial hair…). Young readers are sure to love it and parents are sure to get a chuckle out of it as well.

Posted by AnonyMouse at 8:09 PM