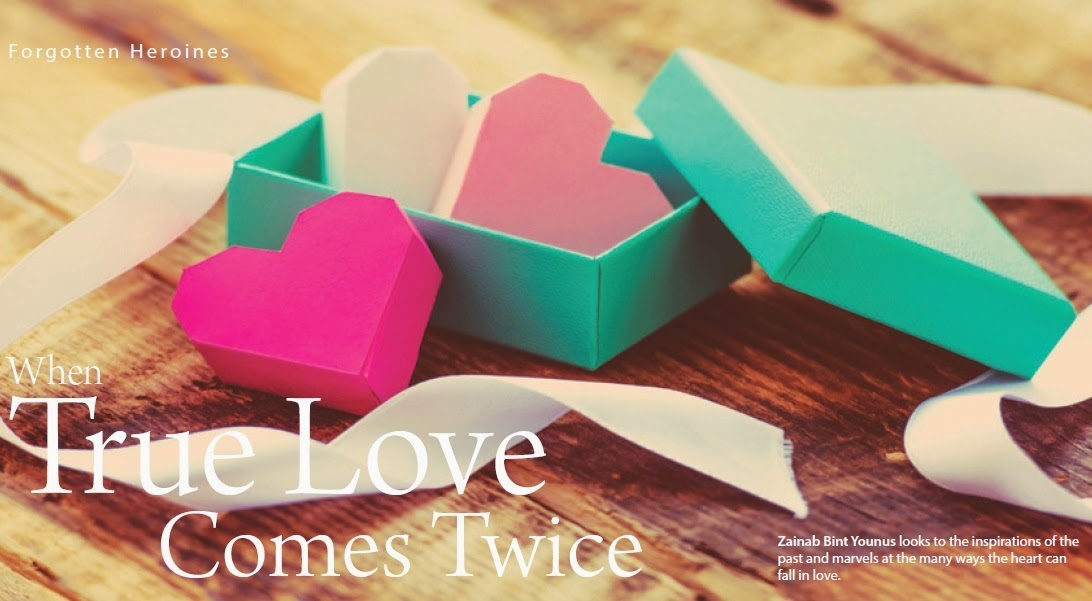 You live once, you die once, and you only have one true love... or so many people have been raised to believe.


A culture of fairy tales and happily ever afters, romcoms and romance novels has raised generations of people to believe that out there in the world is just one person who was meant to be with you, just one person whom you will fall in love with so deeply that you will never truly love anyone else besides them.


Umm Salamah (radhiAllahu 'anha) proved this theory false. She had not just one of her life, but two true loves!


Umm Salamah was married to Abdullah ibn 'Abdul-Asad - also known as Abu Salamah, the father of her child. Together, they were amongst the first of those who accepted Islam, and made the first emigration to Abyssinia. Although they were separated on their second hijrah to Medinah, their love was strong and endured to see them reunited, and until Abu Salamah died of a battle-wound.


On his deathbed, Umm Salamah tearfully told her husband, "If the husband of a woman dies and he is of the people of Paradise, and his wife dies after him without having remarried, Allah will bring them back together in Jannah. Let us pledge that neither of us will remarry!"


Abu Salamah asked her, "Will you obey me in whatever I request of you?"


Abu Salamah gazed at her, his heart overflowing with love for her, and told her, "If I die, swear to me that you will remarry!"


While Umm Salamah looked on in shock, he supplicated to Allah: "O Allah! Provide for Umm Salamah a man who is better than me!"


Umm Salamah had spent her 'iddah grieving for her deceased husband, her heart breaking every time she thought of his gentleness, his kindness, his courage, and his patience. As she cradled her newborn daughter, she wept at the thought that Abu Salamah would never see his daughter, and that there might be no man who would be willing to raise another man's children as his own.


She thought back often on his words and wondered, in anguish, "Who could be better than Abu Salamah?"


Her answer was questioned almost immediately: when her 'iddah ended at the birth of her daughter, Zaynab, RasulAllah (sallAllahu 'alayhi wa sallam) asked for her hand in marriage.


In disbelief, Umm Salamah sent him a response: "I am an older woman, I am a jealous woman, and I have children from my previous husband."


With his characteristic tenderness, RasulAllah (sallAllahu 'alayhi wa sallam) answered her fears: "I am older than you; Allah will remove your heart of jealousy; and I will raise your children amongst my own."


The hesitation in Umm Salamah's heart, and the remnants of her grief for Abu Salamah, faded away, replaced with a sense of calmness and peace.


Abu Salamah's du'a had been answered, and once again, Umm Salamah experienced the wonder and beauty of true love... for the second time.


There are many men and women who fall in love and are devastated at its loss… whether that loss occurs through death, divorce, or simply tests and trials in life that one never anticipated. The grief that one experiences can feel overwhelming and unbearable, and often one wonders if they will ever be able to experience such love again.


Yet though our own concept and understanding of love is limited, Allah, al-Wadud, is not.


The Messenger of Allah said:


“Verily, the hearts of the children of Adam, all of them, are between the two fingers of the Most Merciful as one heart; He directs them wherever he wills.” (Sahih Muslim 2654)


The One who placed love in our hearts for one person, is easily able to heal our broken hearts and grant us the deep joy and comfort of another love in our lives – someone whom we will love not as a replacement for the person we have lost before, but as someone who will have captured our hearts in their own unique way.


On the other hand, there is the unique situation of polygamy. It is a difficult thing for many women to understand and accept, and it’s true that polygamy amongst Muslims has garnered a bad reputation with a lot of negative baggage.


Even so, it is something that should be recognized – although there are many Muslim men who have done polygamy badly, there are those who have done it well and with justice. For these men, Allah has also blessed them with true love, not once, but twice or even several more times.


Abu Bakr (radhiAllahu ‘anhu) is in fact well known for being married to two great women: Umm Rumaan, the mother of A’ishah (radhiAllahu ‘anha), and Asmaa’ bint ‘Umays. Although he divorced his first wife, Qutaylah, who did not accept Islam, Abu Bakr cared for Umm Rumaan and Asmaa’ dearly.


When Umm Rumaan died, RasulAllah (sallAllahu ‘alayhi wa sallam) prayed Salatul Janaazah over her body and lowered her into her grave, saying, “Whoever wishes to see a woman from amongst the hoor of Paradise, let him look upon Umm Rumaan!”


As for Asmaa' bint 'Umays, she was a woman who had undertaken both emigrations for the sake of Allah - an honour limited to a mere handful of the Sahabah of RasulAllah (sallAllahu 'alayhi wa sallam), and one which he reassured her regarding.
When Abu Bakr lay on his deathbed, he insisted that it be Asmaa' alone who should wash his dead body. Considering how many other Companions were still alive at the time, Abu Bakr's request was a sign of his deep love and trust for his wife Asmaa'.


For men and women alike, Allah’s mercy for His creation is such that He enables our hearts to be capable of so many different types of love; He has given us the ability to love, to lose, and to love again. Indeed, it is through this very blessing of His, the gift of being able to love repeatedly and in so many ways, that our hearts grow closer to Him in taqwa… a love borne of hope and awe. Truly, who is more deserving of our love other than Al-Wadud?


{And of His signs is that He created for you from yourselves mates that you may find tranquillity in them; and He placed between you love and mercy. Indeed in that are signs for a people who give thought.} (Qur’an 30:21)

Posted by AnonyMouse at 1:46 AM

I have enjoyed reading your post. It is well written. It looks like you spend a large amount of time and effort on your blog. I appreciate your effort. Please check out my site.
true love

The Prophet was the exception. You won't find many examples of this today.