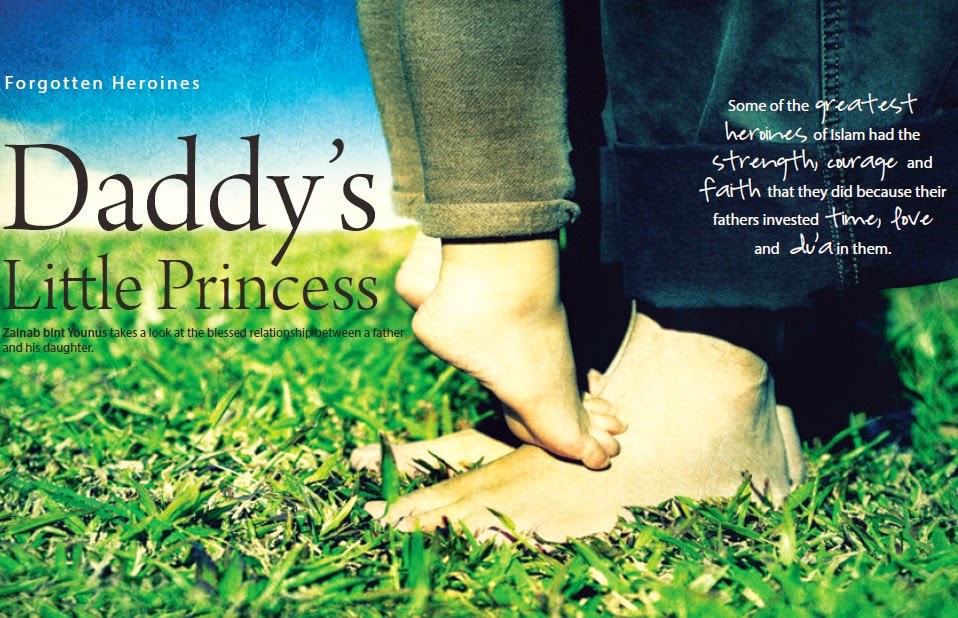 “Daddy’s little girl” is spoiled, coddled, and cuddled as a child – but what happens when she’s no longer a little girl, but growing up into a young woman?
Amongst the many family dynamics issues that the Muslim community is beginning to address, one of the least-discussed subjects remains that of father-daughter relationships.


The role of a father in his daughter's life is pivotal: he is the first man in her life; the one who teaches her what he, a male, thinks of her, a female; and thus shapes her sense of self-worth in the eyes of other men; the one whose behaviour and mannerisms will influence her mental image of “the perfect man” and her choice of life partner.
Due to many unfortunate cultural standards, Muslim men often don’t realize this, or that the Sunnah of RasulAllah (sallAllahu ‘alayhi wa sallam) reflected the ideal relationship that every father should have with their daughter(s).
Some of the greatest heroines of Islam – including Fatimah (radhiAllahu ‘anha) – had the strength, courage, and faith that they did because their fathers invested time, love, and du’a in them. Fatherhood is not just a beautiful gift from Allah, but an honour. A father’s relationship with his daughters could very well be a means of him entering Jannah… and of raising the next generation of heroines of Islam.
RasulAllah (sallAllahu ‘alayhi wa sallam) said:
“Whoever has two daughters and treats them kindly, they will be a protection for him against the Fire.” (Ahmad, Ibn Majah)

Posted by AnonyMouse at 8:03 PM

I was truly blessed by having a father (may he rest in peace in jannah) who gave much of his time to his children and treated all of us with love and consideration.

He was the greatest influence in my childhood regardless of the fact he had 5 other (older chidren) demanding his attention.

Your blog is eminently relevant at a time when not all fathers view their duties as did my father.