A Lioness Amongst Scholars 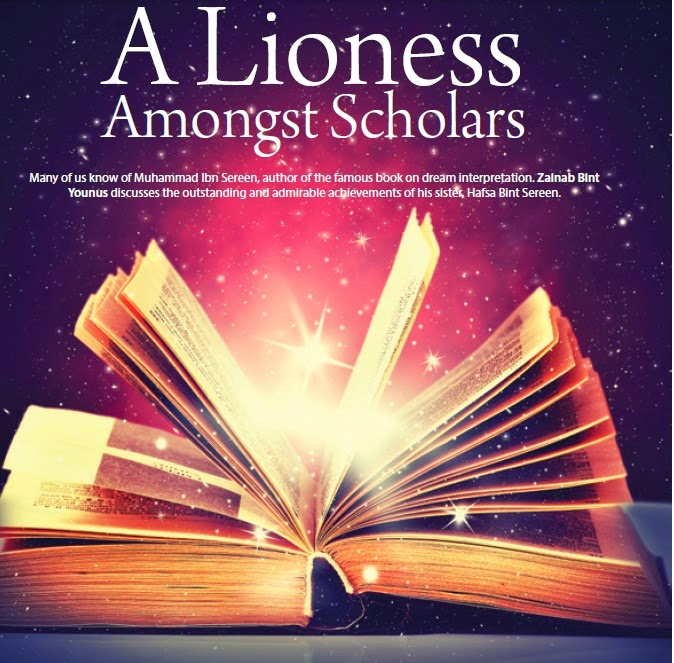 The era of the Tabi’een is often referred to as the golden age of the Islamic Sciences – a time during which scholars studied at the feet of the Sahabah of RasulAllah (sallAllahu ‘alayhi wa sallam), traveled the world in search of ahadeeth, and began to compile what are now known to be the greatest books of classical Islamic knowledge.
The names of the Tabi’een are many: Fudhayl ibn ‘Iyaadh, Sa’eed ibn al-Musayyib, ‘Urwah ibn az-Zubayr, Imam Malik ibn Anas… and many more, besides.

However, amongst all these masculine names, a feminine name stands out: Hafsa bint Seereen.

Hafsa was the daughter of Seereen, the freed slave of Anas ibn Maalik (radhiAllahu ‘anhu), and Safiyyah, the freed slave of Abu Bakr (radhiAllahu ‘anhu). Due to her parents’ proximity to the Sahabah, Hafsa and her numerous siblings were raised in a household that was permeated with knowledge. Hafsa and her sister Kareemah were both known for memorizing the Qur’an at a young age; Kareemah at the age of nine, and Hafsa at twelve.
While Kareemah grew up to be known and revered as a great ‘aabidah (worshipper), Hafsa’s destiny was slightly different. Though it is her brother Muhammad ibn Seereen who is better known today, in particular for his book on dream interpretation, it was Hafsa who was respected most highly in her time.

Living up to her namesake, Hafsa was a lioness amongst the scholars of Madinah. Hafsa was a qaari’ah (reciter of the Qur’an) and was well-versed in the various recitations of the Qur’an; she was a muhaddithah (narrator of ahadeeth); and she was a faqeehah (Islamic jurist) as well.
To be a scholar in any one of these fields was and is considered to be a major achievement; in Hafsa’s case, she excelled in all three.

Her knowledge and expertise was not limited to a select circle, or restricted only to women. The men of Iraq, scholars in their own right, publicly acknowledged Hafsa’s superiority.

Iyaas ibn Mu’awiyyah said:
‘I did not meet anyone whom I can prefer over Hafsah.’ He was asked: ‘What about Hasan al Basri and Muhammad ibn Sireen (her brother)?’ He said: ‘As for me, I do not prefer anyone over her. She learnt the Qur’aan by heart when she was twelve years old.’ (Al Mizzi, Tahdheeb al-Kamaal, xxxv. 152.)

Hishaam narrates that when Ibn Sireen (her brother) would find something difficult and ambiguous (ashkala ‘alayhi) regarding the Qiraa’ah (recitation), he would say, “Go and ask Hafsah how to recite.” (Sifah As-Safwah, Dhikr Al Mustafiyaat min ‘Aabidaat al Basrah.)

As a muhaddithah, Hafsa’s chains of narration were both short and strong, which resulted in her narrations being included in all six authentic books of hadith (as-Sihaah as-Sitta).

Despite her impressive qualifications, despite the fact that the male scholars of Medina used to visit her in search of knowledge, Hafsa didn’t live in an ivory tower of academia.
Keenly aware that the upcoming generations were tempted to abandon knowledge for entertainment, and worship for luxury, she reached out to them repeatedly. One of her most well-known pieces of advice to the youth of her time was recorded:

“O youth (Ya Ma’shar ash-Shabaab)! Take from yourselves while you are young, for certainly I do not see (real) action except in youth.” (Sifah As-Safwah, Dhikr Al Mustafiyaat min 'Aabidaat al Basrah)

Hafsa was just one of many intelligent, educated women in Islamic history, but she is also one of the few who achieved mastery in fields which are now considered to be predominantly male. Her accomplishments prove that in the earlier generations of Islamic history, it was not gender which merited renown, but excellence of intellect combined with wisdom and worship.

Today, there are Muslim men who claim that women’s education is not a high priority, that it is nigh-impossible for them to be good wives or mothers while pursuing a vigorous education and career in academia. Yet if they were to find themselves before Hafsa bint Seereen, they would find themselves justly humbled before the knowledge and power of the ‘Aalimah, the Saa’imah, the ‘Aabidah… the lioness amongst scholars of Islam.

Zainab bint Younus (AnonyMouse aka The Salafi Feminist) is a young woman who finds constant inspiration in the lives of the Sahabiyaat and other great women in Islamic history. She hopes that every Muslimah is able to identify with the struggles of these inspirational women and follow in their footsteps to become a part of a new generation of powerful Muslim women. She blogs at http://www.thesalafifeminist.blogspot.com

Very interesting article. I knew of the Islamic Golden age concerning mathematics and the sciences, but was all-round ignorant of female contributors in that time.
Peace x