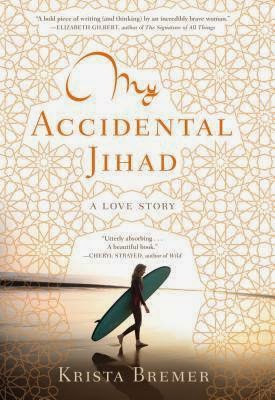 “My Accidental Jihad” is a book which proves that sometimes all it really takes to pick up a book is the title. In that, Krista Bremer was successful – I was certainly interested by the cover, and the blurb that describes her book as an “unlikely love story” between the author (an all-American surfer gal) and Ismail, a Libyan man raised in what could very well be an entirely different world.

The author is clear that her book is a very personal memoir, a journey that explores her own subconsciously held stereotypes and prejudices against the mysterious ‘other’… even as she fell in love with and married an Arab-African man. Her honesty is commendable even as it is uncomfortable; excerpts like the following made me wonder if I could make myself finish reading the book:

“Suddenly the regal Arab before me was gone, replaced by a cartoon Arab, a Disney character on a magic carpet. Now he was a dark bad man in an Indiana Jones movie, part of the hypnotized throng who prayed on all fours to the evil lord of fire, chanting mumbo jumbo and raising their backsides into the air. Or he was the bloodthirsty Libyan hell-bent to slaughter the brilliant scientist in Back to the Future, the one who ca¬reened through the mall parking lot in a VW bus, his checkered head cloth snapping in the wind as he sprayed gunfire like rain onto the asphalt.”

While I did realize that the purpose of mentioning such things was to highlight her ingrained prejudices, I still felt a sense of aversion to the turns of phrase utilized.

Ms. Bremer does a lot of compare and contrast between her own upbringing and background, and that of her husband’s; and the many unexpected challenges that arose during their marriage. From the purchasing of a new car to haggling over diamond rings, the author ruefully and good-naturedly talks about the beautiful ups and challenging downs of her inter-cultural marriage. The differences between Ismail and Krista are more than just cultural. Ismail is careful, deliberate, and serious, his outlook on life shaped by a harsh, poverty-stricken childhood in Gaddafi-ruled Libya, while Krista is the product of a luxurious, consumer-driven American society, longing for all the trappings of the American dream. It is interesting to note the author’s admission of being unable to relate to her husband’s background, with how she tries to look at her own culture through his eyes, and realizes that it may not be as glamorous as she’d always thought.

Each chapter reads somewhat like an anecdotal essay; by themselves, easy to digest, although it lends the book a somewhat choppy feel.

However, what really drew me into the book was the author’s description of her first visit to Libya – and many of her thoughts and experiences echoed my own, down to the agony of a first pregnancy in a foreign country where the concept of personal space and privacy are nearly non-existent.
The awe and wonder, as well as the confusion and frustration, of being surrounded by strangers who are now considered family; of sights and smells both pungent and oddly appealing, of a lifestyle that had deeply held traditions mixed with wisdom and superstitions… reading Ms. Bremer’s story reminded me of my own past, and much more able to relate with her reflections.

One thing which I found disappointing – and which had the potential to really capture a reader’s interest, and emphasize the ‘point’ of the book – is that the author mentions her own foray into Islam, and her earliest prayers, only as a casual aside. I wanted to know more about her spiritual journey, which, surprisingly, was not discussed in much depth.
Though her husband is a Muslim, religion does not play as direct a role in their story as one might think… although she was frank in how she struggled with the first Ramadan, particularly the somewhat noxious oral side effects. Perhaps most of the most interesting anecdotes was that of her young daughter’s choice to start wearing hijab, and her own internal struggle with how others would view her daughter – and how she herself viewed her daughter’s decision. It was this, more than anything else in the book, that truly highlighted the message that Ms. Bremer was trying to convey… the paradoxes, contradictions, immense frustrations, and imperfect beauty of an unconventional love.

“My Accidental Jihad” leaves one with – at the very least – a glimpse into another person’s unique experiences, with reflections both new and familiar. What readers derive from it most likely depends on what the reader brings with them when they start reading; for myself, I was not particularly swept away or impressed, but I was most certainly able to appreciate those experiences which were so similar to my own.
This book may be a helpful read to those with non-Muslim families who may not have been exposed to or interacted with many Muslims (or inter-faith marriages involving Muslims). For some, it can be an educational experience or simply an enjoyable read; all in all, “My Accidental Jihad” is a welcome contribution to the ever-increasing material of the collective Muslim narrative.

Posted by AnonyMouse at 1:48 AM