Hawwaa': Vicegerent Upon the Earth 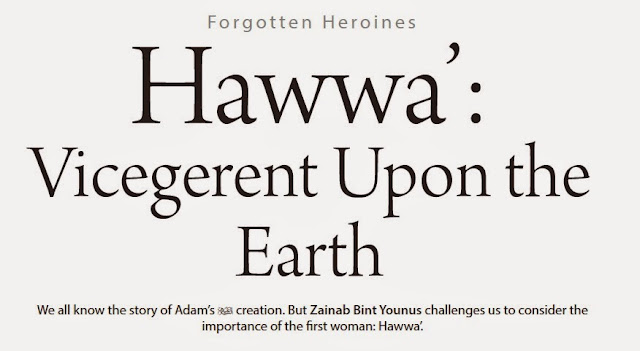 When we read this verse, many of us automatically think about the creation of Prophet Âdam (‘alayhissalaam), the dominance of humankind on our planet, and even the formal position of Khalifah of the Islamic State – yet how many of us think about this verse and how it applies to Hawwaa’ (‘alayhassalaam) – or, indeed, all womankind – in the same capacity?

Allah describes the creation of humankind in Surah an-Nisaa as being ‘min nafsin waahidah’ – from a single soul – and from each soul, its zawj – its partner, its mate, its equal. Whenever Hawwaa’ (‘alayhassalaam) is mentioned in the Qur’an, it is in partnership with her perfect mate, Âdam (‘alayhissalaam). It is also interesting to note that the word ‘nafs’ in Arabic is linguistically feminine, and the fact that every human fetus originates as a female before growing and ‘becoming’ male.
Hawwaa’ was the first human woman in all of existence, just as Adam was the first human man. 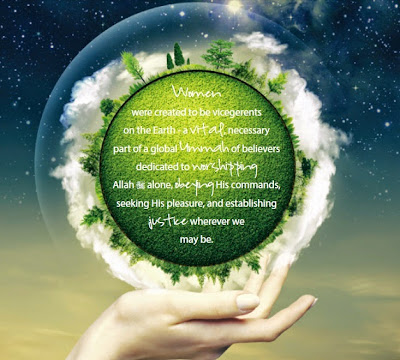 They were both created for a specific purpose, and both endowed with a unique intelligence… which is one of the reasons for which the Shaytaan resents all humankind and is dedicated to misleading both men and women.
From the very beginning, even while they were still living in Jannah, Adam and Hawwaa’ were given the same set of instructions:

{And We said, "O Adam, dwell, you and your wife, in Paradise and eat therefrom in [ease and] abundance from wherever you will. But do not approach this tree, lest you be among the wrongdoers."} (Qur’an 2:35)

When, inevitably, they both succumbed to Iblees’s whispers, they did so not because Hawwaa’ lured Adam into it, nor because Adam commanded Hawwaa’ to follow his lead. Rather, they both had free will and the agency to make their own decisions. Adam and Hawwaa’ made an independent choice to eat from the forbidden tree – and they were both held individually accountable for their actions. As soon as they realized what they had done, both Adam and Hawwaa’ turned to Allah in repentance:

{They said, "Our Lord, we have wronged ourselves, and if You do not forgive us and have mercy upon us, we will surely be among the losers."} (Qur’an 7:23)

Allah accepted their repentance, but He also decreed that they would still experience a consequence.

{We said, "Go down from it (Paradise), all of you. And when guidance comes to you from Me, whoever follows My guidance - there will be no fear concerning them, nor will they grieve.} (Qur’an 2:38)

Thus did the first humans descend upon Earth, thereupon to establish themselves as guardians and caretakers of this planet.

Hawwaa’ was never considered to merely be Adam’s meek, subservient shadow, but rather, as a human being who was spiritually equal to her male counterpart. As we can see from the verses, Hawwaa’ was also given a specific command that she chose to disobey; she also recognized her mistake, and repented sincerely. She did not go through her husband to turn to her Lord, but rather took responsibility for her own actions and made her own effort to beg Allah for His Forgiveness. Furthermore, Hawwaa’ was also made to experience the consequences of her actions, by being sent down to Earth along with Adam.

From all of this, it is clear that Hawwaa’ was never a silent bystander, but rather, created to be an active participant –a human being with intelligence, agency, and responsibilities. Hawwaa’ is symbolic of all women: Allah did not create us to stand aside and observe or to simply float and be moved by the currents of our male partners; but rather, to be individuals who are capable of making their own choices in life, and to be held accountable for our actions.

In short, women were created to be vicegerents on the Earth – a vital, necessary part of a global Ummah of believers dedicated to worshipping Allah alone, obeying His commands, seeking His Pleasure, and establishing justice wherever we may be. Like Hawwaa’, we have been given duties and responsibilities as khalifah – and it is up to us to carry them out in a fitting manner, to fulfill our role as vicegerent of the Earth in a way that will guarantee our entrance into Jannah, where we will meet Hawwaa’ (‘alayhassalaam), making her proud of the generations of heroines who maintained her legacy.

Adam was the first human created, man or woman and God blew the soul into him.