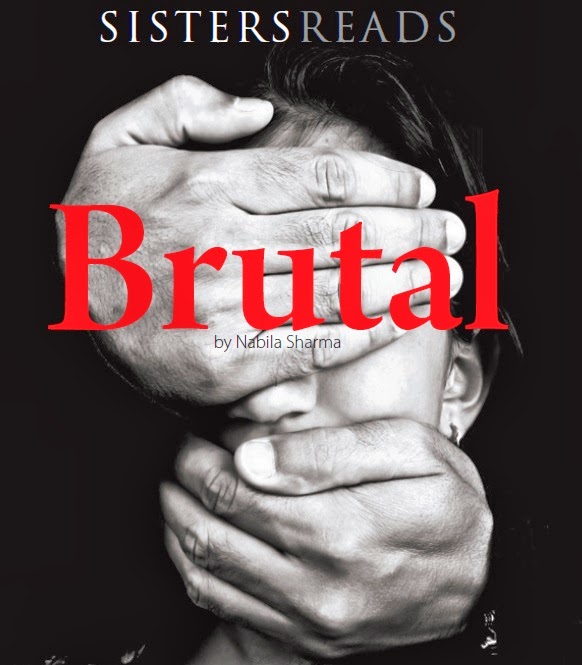 Brutal is the heartbreaking true story of a young girl who was molested for several years by the imam of her local masjid, her madressa teacher. The author, Nabila Sharma, recounts her childhood as the only daughter of immigrant Pakistani parents, who settled in the UK with four older brothers. In the tradition of many desi immigrants, Nabila’s father sought to provide a better future for his children by owning and operating a small newsagents shop, in addition to working extra jobs, while his wife
helped run the shop and look after the children. Nabila’s life was that of any little girl – playing with her toys, going to a new school and making friends.

At the age of seven, Nabila joined her brothers in attending the local masjid’s madressa to learn Urdu and how to read the Qur’an. From her description of her first experiences there, it is obvious that these were the early days of Muslim immigrants in the West – where madressa was taught by harsh, unloving teachers who felt no qualms in beating their students and made no effort to teach
the young pupils the beauty of Islam. What is unfortunate is how such a negative experience obviously pushed young Nabila away from loving her faith or searching a deeper understanding of it; the first two chapters show how much more she was attracted to the Sikh religion instead.

After several teachers came and went, the madressa found a new, permanent imam to teach the young Muslim children who attended regularly. It was then that Nabila’s years-long nightmare began.

Following the typical pattern of child abuse, the unnamed teacher began to shower Nabila with unusual attention – first looking at her constantly from afar, then calling her aside and choosing her for the ‘special task’ of cleaning his private quarters. Then, as soon as he had her alone, the abuse began, in slow but ever increasing intensity.
The description of the abuse - of the psychological impact it had on young Nabila - is harrowing. As the abuse continued for years, from the ages of seven to eleven, Nabila fell into self-harming as a way to cope with the horrific experiences she was forced to go through. Her every attempt to try and stop her abuser, including when she offered herself in place of a young girl who was to become his next victim, was to no avail; even when her parents found out what was happening, they made no move to remove her from the madressa or to report the teacher to the police.
At the age of eleven, Nabila was finally able to leave the madressa, and her abuser, forever. However, she had been so traumatised from the events that had taken place, with no recourse or even therapy to cope with it, that her life afterwards continued to suffer.

While the lesson of the story is that child abuse occurs much more often than we would like to think and that there are far too many adults who fail to protect the children under their care, I found other morals to be derived from the narration of this horrific story.

First of all, religion plays no role whatsoever in the terrible crimes that are committed by the adherents of the faith. Whether Catholic priests, Muslim imams or atheist teachers, child abuse and rape are the province of filthy, twisted individuals who have no qualms about wielding power and control over their vulnerable victims.

Secondly, without any positive spiritual relationship at a young age, it is all too easy for victims of abuse to relate their abuse to the faith under the guise of which they were abused. One particularly heartbreaking sentence from Nabila which shook me was “after that night I never said my prayers again. What was the point? No one, or no god, was ever going to rescue me.”

There are certainly those survivors of abuse who are able to move past the religious trappings of their abusers and to seek the truth of God, but for many it can be difficult to separate the relationship between religion and abuse. In other cases – in this context, Muslims in particular – the link between the two can push them to seek another religion entirely, without even understanding their own correctly first. From many of Nabila’s descriptions, it seems that through all the years at the madressa, there was no discussion or awareness whatsoever about Allah I or even the basic pillars of Islam. It was all about ‘memorising prayers’. Even for those who are not abused, this lack of spiritual education is crippling and dangerous.

Brutal is a sobering reminder of the crimes that can be committed even by those whom we, as Muslims, are most likely to trust: those whom we look to for leadership and guidance. On the other hand, it is also a sharp wake-up call to parents to be keenly aware of their children’s lives and of their responsibility to be true guardians over their charges. There is never an excuse to place cultural notions of “family honour”, “reputation” and “shame” over the physical, sexual and psychological safety of a child. On the Day of Judgement, any adult guardian who knowingly allowed their charges to continue to be harmed in any way will stand before Allah and be held accountable for the grave transgression of their duties.

Nabila Sharma’s account of the abuse she suffered as a child at the hands of someone who should have protected her and taught her the Deen should be a brutal reality check for those of us who still deny that such things happen in our communities. As Muslims, it is our duty as an Ummah to hold such criminals accountable for their evil deeds and to protect the vulnerable against the injustices perpetrated against them.

Zainab bint Younus (AnonyMouse) is a writer, social justice activistwannabe and absent-minded bookworm. She writes for SISTERS Magazine, SaudiLife.net and blogs at http://www.thesalafifeminist.blogspot.com.

Posted by AnonyMouse at 8:37 PM

Your blog is inspirational - Shukran for the lovely articles as well as the book review.

May the Peace, Mercy, and Blessings be upon you all, especially Nabila...

There are not words that can express the feelings of frustration, sadness, and an out-pouring of sympathy that I'm witnessing after reading this...