Where Are The Fathers? Interview With A Scholar 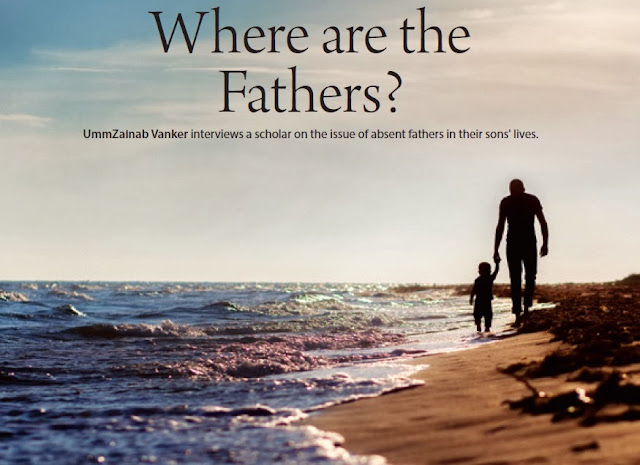 Umm Zainab Vanker spoke to a well-known scholar, Shaykh Hussain Yee of Al-Khadeem Foundation in Malaysia, to find out about his personal approach to being a hands-on parent to his son, as well as his views on how to get Muslim fathers to reconnect with their sons. Read on to find out what the respected shaykh’s replies were.

Q. What was your relationship with your son like as he was growing up?

A. Alhamdulillah, we have a good relationship. My son and I, as well as my wife and I, always worked together as a team. When the mother can’t get through to them, the father then comes in with a different approach - not shouting, but asking and listening. I always made sure that the whole family did things together.

Q. Mothers nowadays often complain that fathers are not connected to their sons. They expect mothers to push their sons into having a relationship with them. What advice can you give the fathers on building that relationship without coercion from the mother?

A. They need to get connected to their sons by doing activities together. They need to remember the ayah:
{O believers, save yourselves and your family from the Hellfire whose fuel is men and stones...} (Al-Tahrim:6)

I always advise and remind the brothers that they are part of the foundation of the family. They are equally responsible for their children - it’s not just the mothers. By doing things together, whether da’wah, visiting the sick, helping the poor, etc., as a team,they will grow and learn together. Having family activities is crucial in teaching everyone, the young how to lead and the parents how to model being leaders. One of the main things I tell my volunteers whenever we have any scholars or those of knowledge visiting or when I myself visit somewhere is that I ask to have a session only for the volunteers and their families with the scholars. As whenever there is some conference or a visiting scholar around, the brothers are always the ones busy seeing to them and their families - wives and children - are left out. They feel as if their father is ignoring or being taken from them for that time. We need to make sure we know who the families of the volunteers are and connect with them!

Q. When it comes to their own sons, even the practising, knowledgeable brothers may fall short and fail in building a connection with them. They will not allow their sons to speak in gatherings where they may have some knowledge of things. For example, mothers would like that they have a relationship like Umar and his son, Abdullah ibn Umar, or Rasul Allah (sallAllahu 'alayhi wa sallam) and Ali. Fathers today will tell their sons to keep quiet or shut up if they try to say something in a gathering of elders, instead of allowing them to speak. What is your advice to them?

A. They need to learn how to be able to involve and train their kids in when to speak. The fathers need training first and then they can pass it onto their sons. We also have a great problem in communication. Failure in communication between spouses and their children and failure in how to communicate with Allah first. We need to learn how to communicate with Allah and then each other in a way that will promote understanding between all. It’s not enough that these fathers only save themselves but again we remind them of the ayah above and that they are responsible to save their children from the fire as well.

Q. How do we get this message across to the fathers?

A. The fathers need to be trained early, even before they have children. They need to not only learn but, more importantly, to act on the knowledge they gain. A lot of Muslim men will learn the ahkaam (rulings) but when it comes to practising it, and the spirit of the rulings, they fail in doing so. A big problem and shortcoming is in our scholars today. We don’t show or lead by example. Most speak about ahkaam and fiqh (rules and Islamic Jurisprudence) but we don’t give the same amount of time to explaining, teaching and showing tarbiya ar-rabaani (divinely guided education). The fault again comes back to the shuyookh who do not emphasize the importance of teaching tarbiyah and showing how it’s done for their students to learn by example.

Q. How do we get brothers involved in being mentors to those boys whose fathers are emotionally absent or to those who have no strong father figure role models (from divorced or single parent homes)?

A. There must be sessions for the brothers to be involved in their communities not just by volunteering for events, but to be engaged in a meaningful manner with those who need it – the youth. They need to communicate with the boys regularly and not limit themselves to once a month events. Having family-centred and family-welcoming events in the community is very important so that the burden does not fall on the mothers alone, but so that fathers will be encouraged to spend more time with their children.

Al-Khadeem (an Islamic center near Kuala Lumpur) strongly emphasises family values by regularly holding classes and activities for families, meaning that not only mothers are welcome, but fathers are strongly encouraged to attend at the same time to benefit in the same way. Children are also given classes on how to be respectful and how to learn from their parents. In this way, all units of the family are involved and brought together so that they can be on the same page.

In cases of divorce, parents have to realise that both sides need to teach and show respect to the other; as the ayah says, they should “part on good terms.” Children should not see their parents behaving in a disrespectful manner towards each other and showing hate. Fathers still need to communicate with the mothers regarding their children’s upbringing and it is still very important that they be involved in their children’s lives in a positive way

Q. You said that the shuyookh have fallen short in emphasising tarbiyah in the family (especially for fathers) and that we must remind them. How do we remind them to return to the core values necessary for an Islamic household?

A. We need to remind them that they are the ones responsible for they are the first in line to teach and to show by example. A lot of tarbiyah is missing, even amongst many of the shuyookh and their families. Local and visiting scholars can be reminded that their actions with their sons and families will be noticed by those they teach and then followed.

A. There needs to be many more programmes and classes specifically targeted towards the men. Most shaykhs teach fiqh (jurisprudence) and ahkaam (rulings) without teaching their male students the importance of adab (etiquette), akhlaaq (good character) and tarbiyah (upbringing) according to the sunnah. If we want to see a change, we should approach the teacher and inform them about this great need in the community. Sisters should not be shy in asking for classes from the shuyookh.

Many fathers look up to and take their cues in how to implement being a hands on father from the scholars. Unfortunately, unlike Sh. Hussain, we have not heard many of the more prominent shuyookh who are front and centre in the da’wah circles, pointing to themselves as falling short in this matter or putting great emphasis on the tactile acts of fathering.

Insha Allah in part 3 of Where are the Fathers?, practical points will be given on how to get fathers involved and become a greater part of their sons’ lives.

Umm Zainab Vanker has been active in da'wah and community activism in Canada for the last ten years, and is deeply concerned with issues related to family and parenting. She is the mother of one crazy daughter, three teenage sons, and grandmother to a three year old girl. She continues to struggle in raising her children and finding resources for them even in a Muslim country.

Posted by AnonyMouse at 1:37 AM