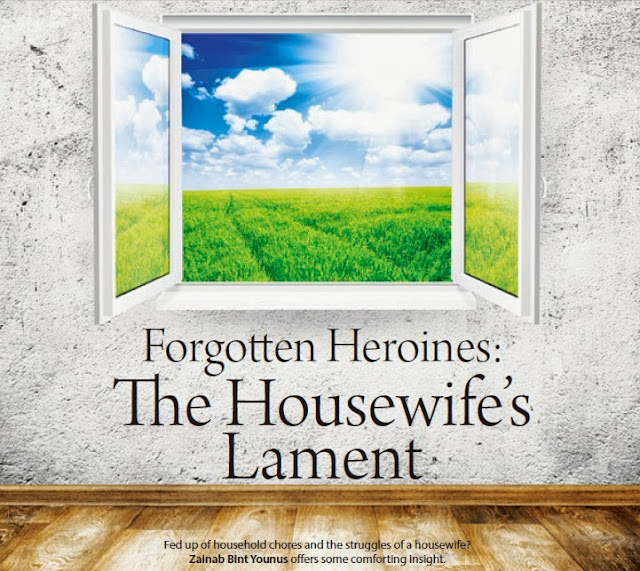 Money is tight. The kids are demanding. Skin is raw from all the cooking, cleaning and chores that have to be done every day. There’s absolutely no time to spare for anything else, whether it’s pursuing further education or volunteering for a special cause.

Does this sound familiar? There are Muslim women all over the world who find themselves at home, living life as domestic stay-at-home mums and housewives. It’s a physically and emotionally demanding job and it’s also a pretty thankless one. How can spending all day serving others, instead of being involved in some kind of noble, public cause, ever be truly fulfilling and worth recognition – not just by people, but by Allah Himself?

Fatimah bint Muhammad is known to be one of the four most perfect women in the entire world.
“Prophet Muhammad (sallAllahu 'alayhi wa sallam) drew four lines and said to the Companions, "Do you know what these are?" They said, "Allah and His Messenger know best." He said, "The best women of the women of Paradise are Khadeejah bint Khuwaylid, Fatimah bint Muhammad, Maryam bint Imran and Aasiyah bint Muzahim (the wife of the Pharaoh)." (Ahmad)

Yet when we look at the biography of Fatimah bint Muhammad (radhiAllahu 'anha), one could say that in comparison to others amongst the early Muslim women, her life was relatively unremarkable. She grew up during a difficult time for her parents, when her father was being publicly mocked and derided for preaching his message; she lost her mother at a relatively young age and she married her cousin Ali ibn Abi Talib when she was about fifteen years old. Some of the most well-known ahadeeth related by her mention how physically demanding her lifestyle was, such that her hands would crack and bleed from the wheat-grinding that she used to do.

What made Fatimah so special? So special, in fact, that she will forever be known as one of the greatest women of Paradise?
Fatimah bint Muhammad is not known for an act of dramatic courage such as that displayed by Nusaybah bint Ka’b during the battle of Uhud, but she too provides an example for a situation that many Muslim women around the world live and continue to face: the everyday drudgery of life as a wife and mother.

Fatimah may have been the most beloved daughter to the Messenger of Allah, who was also the head of the Islamic State and leader of the Muslim army, but that didn’t mean that her life was one of luxury or ease.

Quite to the contrary, Fatimah was the mother of two young boys and ran her household single-handedly. Life was difficult back then, with none of the technologies that smooth our way through tedious tasks today. She used to grind the wheat for her bread with her own hands, to the point that her hands would crack and bleed. Her husband, ‘Ali ibn Abi Talib, was an employee of one of the Ansaar, but the income was meagre and they struggled to survive on a daily basis.

One day, weary and despairing of the toll that their lifestyle was taking on her, Fatimah decided that she would approach her father, RasulAllah (sallAllahu 'alayhi wa sallam). At the time, the Muslims had won a battle and, as a result, had captured several prisoners and other spoils of war. With the reasoning that as a member of the Ummah, she was entitled to some relief, Fatimah went to visit one of RasulAllah’s homes. She did not find her father present, but seeing her stepmother A’ishah, Fatimah shared the story of her bleeding hands and her wish for a maidservant to take on a share of the burdens.
Fatimah went back to her home, and when RasulAllah returned to his own house, A’ishah told him about his daughter’s visit.
That same night, RasulAllah slipped into his daughter’s home, where she and ‘Ali were already lying in bed.
‘Ali narrates, “I wanted to get up, but the Prophet said, ‘Remain in your place.’ Then he sat down between us until I felt the coolness of his face on my chest. The Prophet said, ‘Shall I teach you a thing which is better than what you have asked me? When you go to bed, say, 'Allahu akbar' thirty-four times, and 'subhanAllah’ thirty-three times, and 'Alhamdulillah’ thirty-three times for that is better for you both than a servant.’" (Bukhari, Book #57, Hadith #55)

After this, Fatimah never repeated her request for a maid ever again.

It may seem to be a small, insignificant thing, but subhanAllah this was one of the reasons for which Fatimah earned her position as one of the queens of Jannah. Her life was spent quietly serving her Lord, through her sincere intentions behind caring for her husband and children. Around her, there were many sahabiyaat whose lives seemed much more exciting, full of adventure and grandeur. Her stepmother, A’ishah, was a great scholar; her great-aunt Safiyyah bint Abdul-Muttalib was fierce in battle and the women of Madinah were renowned for their boldness in approaching any matter.
Nonetheless, for Fatimah bint RasulAllah, the path to Paradise was simple – though never easy. For every stay-at-home-mother and housewife who feels that her life is too consumed by daily drudgery, who worries that her life is too dull to be of consequence, the quiet strength of Fatimah bint RasulAllah is an inspiration and a reminder that no deed, however small or seemingly insignificant, is overlooked by Allah, the Most Compassionate, the Most Just.

For indeed, Allah does not allow to be lost the reward of those who do good. (Surah Hud, verse 115)
Jannah is not only for the Prophets, the martyrs, the ascetics, or the scholars; Jannah is attainable by every Muslimah, no matter her occupation or station in life. In the eyes of Allah, every sincere Muslim woman who pledges her life to pleasing her Lord is a heroine of Islam.

Posted by AnonyMouse at 9:12 PM

When hearing of four amazing women who will surely gain ENTRANCE TO PARADISE is a depressing story, then that is TRULY DEPRESSING! May Allah guide your "Anonymous" soul.

Who said it was depressing?