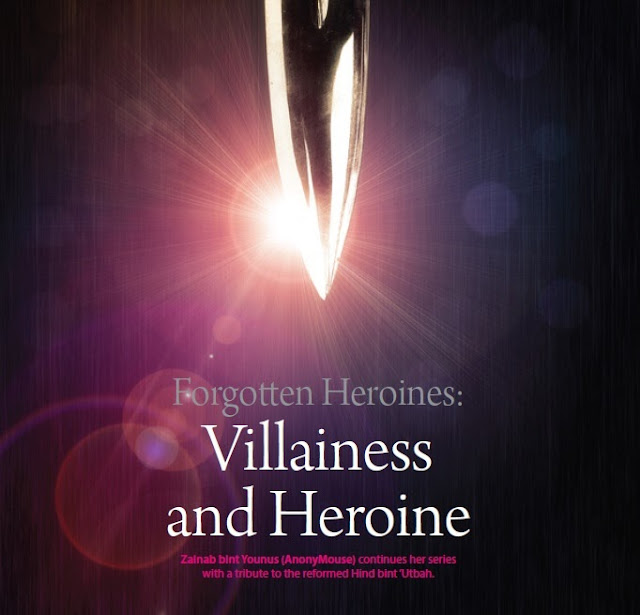 Hell hath no fury like a woman scorned, the saying goes, and even Islamic history is a testament to the statement. Women are powerful figures, whether as heroines or villains, and the role they play in every great story cannot be denied. A woman’s love, or a woman’s hatred, can change the course of battles, can shatter hearts, and can create victory out of ashes.
Such women play a large role in Islamic history; great heroines who are known for their purity of spirit and magnitude of sacrifice. However, amongst the women of the early Muslim Ummah, was someone who was not always pure and innocent, someone whose life was devoted to anger, to hatred, to destroying Islam itself.


In the books of seerah, Hind bint ‘Utbah emerges as a ferocious figure, an infamous villainess who devoted a large part of her life to bringing down her sworn enemy, the Messenger of Allah, Muhammad (sallAllahu ‘alayhi wa sallam). Although she was the wife of the Prophet’s distant cousin, the Qurayshi chieftain Abu Sufyan, Hind was most known for her relationship with RasulAllah: she was one of his earliest enemies, and one of those most dedicated to undermining and defeating him.


Perhaps her most infamous act, Hind commanded her slave Wahshi ibn Harb to hunt down Hamza ibn Abdul Muttalib on the battlefield of Uhud in retaliation for the death of her father and brothers at the hands of the Muslim army at the battle of Badr. Determined to wreak the most of her vengeance, Hind cut out Hamza’s liver and chewed it raw before spitting out on the gory remains of the battlefield.


RasulAllah’s grief and anger were so pronounced when he heard of this act, that it was recorded by Abdullah ibn Mas’ud that, “We have never seen the Messenger of Allah weeping so much as he was for Hamza bin ‘Abdul Muttalib. He directed him towards Al-Qiblah, then he stood at his funeral and sobbed his heart out.”
In the narrations that discuss the strength of Hind’s enmity towards Islam, certain characteristics can’t help but be noticed: her fierce sense of honor, the passion behind her beliefs, the iron determination that fueled all her actions.


It is not recorded that they met in person until after the Conquest of Makkah (although that may have happened, due to their familial relationship), but it is obvious that RasulAllah (sallAllahu ‘alayhi wa sallam) was aware of her as an individual, and of her role in the Makkah-based opposition against him.


Hind bint ‘Utbah accepted Islam after the Conquest of Makkah, and the narration regarding her conversion is a fascinating one.


She approached the tent of RasulAllah (sallAllahu ‘alayhi wa sallam), veiled and surrounded by other women of Makkah. As RasulAllah took the bay’ah (oath of allegiance) from these women, he informed them,
“You will accept that there is no deity worthy of worship except Allah.”
Hind answered, “We accept.”
“You shall not steal.”
Hind answered, “My husband is a miser, and I take only enough for myself and my children.”
“You shall not commit adultery.”
Hind retorted, “Does a free woman commit adultery?!”
After RasulAllah accepted the bay’ah from these women, Hind uncovered her face and said, “I am Hind bint ‘Utbah.”


RasulAllah immediately understood what she meant by that statement. She, the woman who had waged such a strong campaign against him for so long, who had ordered the assassination of his beloved uncle, had just professed her Islam.
Despite the emotions that must have been going through him upon this realization, RasulAllah answered calmly, “Welcome, O Hind!”
Hind continued, “By Allah, there was no house on earth that I wanted to destroy more than your house. Now, there is no house on earth that I so dearly with to honor and raise in glory than yours."


Even now, when most women would be humiliated to present themselves to the person who had been their avowed enemy for so long, Hind bint Utbah was a woman whose pride and self-respect would not allow her to give into humiliation. Even when she surrendered to RasulAllah and accepted Islam, she did so with a dignity and fierce pride that remain an example to all Muslim women.


In return, the Messenger of Allah did not insult her, turn her away, denigrate her, or otherwise reject her. He treated his former enemy with all the grace and dignity befitting him, sallAllahu ‘alayhi wa sallam.


After her acceptance of Islam, Hind channeled her passionate energy for the sake of Allah. Just as she used to sing fierce poetry on the battlefield to spur the Qurayshi troops, she now walked along the lines of the Muslim army, reciting powerful verses to keep the Muslim soldiers steadfast. She was present at the Battle of Yarmuk, and narrated several ahadeeth that were recorded and authenticated in various books of ahadeeth.
Hind remains an integral part of Islamic history, an example for Muslim women around the world. She remains a symbol of ferocity, of power, and integrity; proof that hatred can turn to love, that enmity can become the purest allegiance. Hind was, and is, proof that having a spotless past is not a requirement for accepting Islam, or of being a good Muslim woman; only sincerity of heart and purity of faith matter.

Posted by AnonyMouse at 4:52 AM

Wow, it really baffles me how you can promote pride. It's disgusting that you take no shame in emphasising Hind's 'greatness' all in the name of feminism. You forget your own creator and his beloved messenger (s.a.w).

No woman in the history of Islam is as inspirational as Fatima(R),the Prophet's daughter.